Israel Finkelstein
fink2@post.tau.ac.il
Tel Aviv University – Director
See personal website
Professor Israel Finkelstein is the Jacob Alkow Professor of the Archaeology of Israel in the Bronze and Iron Ages at Tel Aviv University. He is a member of the Israel Academy of Sciences and Humanities and a ‘correspondant étranger’ of the French Académie des Inscriptions et Belles Lettres.

Finkelstein is the Laureate of the Dan David Prize in the Past Dimension, Archaeology, 2005. In 2009 he was named Chevalier de l’Ordre des Arts et des Lettres by the French Minister of Culture and in 2010 received a doctorate Doctorate honoris causa from the University of Lausanne. Finkelstein is the winner of the Prix Delalande Guérineau (2014), awarded by the Institut de France, l’Académie des Inscriptions et Belles-Lettres.

Matthew J. Adams
mja198@gmail.com
W.F Albright Institute of Archaeological Research – Co-Director and Area S Supervisor
See personal website
Dr. Adams is the Director of the W.F. Albright Institute of Archaeological Research in Jerusalem and Co-director of the Megiddo Expedition. He has excavated at numerous sites in Egypt and Israel. He is also Director of the Jezreel Valley Regional Project, a survey and excavation project focusing on the entire Valley over time. In that context he is also Co-director of the JVRP Excavations at Legio, the base of the Roman VIth Legion at the foot of Tel Megiddo.

Management of the Expedition:

Dr. Margaret Cohen has taught ancient history and religious studies at Penn State University and Lycoming College in the U.S. Her research interests include compositional history of the biblical text, Iron Age cult, and ancient foodways, and her current project explores the role of the Jezreel Valley as depicted in the Hebrew Bible, and as supported by archaeology of the Iron Age, specifically as relates to the politics of food. She has excavated at numerous archaeological sites in Israel, Jordan and Egypt and is currently an associate fellow at the W.F. Albright Institute of Archaeological Research in Jerusalem.

Currently doing his post-doc at Brown University. Zach finished his Ph.D. in Geoarchaeology under the supervision of Prof. Israel Finkelstein of Tel Aviv University and Prof. Ruth Shahack-Gross of the University of Haifa. His dissertation focuses on the Intermediate Bronze Age (c. 2500-1950 BCE) settlement phenomena in the arid Negev Highlands through a microarchaeological perspective. Zach received his B.A. in Archaeology and Classics at George Washington University in Washington, DC, followed by an M.A. in Archaeology of Ancient Israel at Tel Aviv University.
Zach has excavated extensively in Israel, including Megiddo (2008, 2012-present), Tel Kabri (2009, 2013), Kirath-Jearim (2017), and for his PhD has led geoarchaeological investigations at a number of Early Bronze (c. 3600-2500 BCE) and Intermediate Bronze Age (c. 2500-1950 BCE) sites in the Negev Highlands (2012-present).

Erin is a Ph.D student in Tel Aviv University’s Department of Archaeology and Ancient Near Eastern Cultures. Her doctoral studies focus on cult in the Northern Kingdom of Israel from the Iron I-IIB. Erin also completed her M. A. at Tel Aviv, and her thesis dealt with an early Iron Age hoard of metallic objects from Megiddo’s Area Q.

Currently doing his post-doc in leipzig. Assaf Kleiman finished his Ph.D at the Department of Archaeology and Ancient Near Eastern Cultures at Tel Aviv University under the supervision of Prof. Israel Finkelstein and Prod. Benjamin Sass. His M.A thesis dealt with the Iron Age IIA ceramic assemblage exposed during the 1970’s at Tel Aphek. In his doctoral studies, he examines the settlement history and material culture of the border regions between the Northern Kingdom and Aram Damascus. He also a senior staff member of the Kiriath-Jearim expedition. 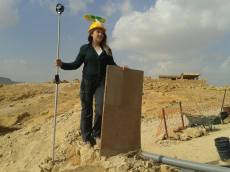 Yana is currently an M.A. student, under the supervision of Pro. Israel Finkelstein. Finished her undergraduate studies at Tel Aviv University. She did her field school at Tel Megiddo in 2016 and has since become a member of the expedition. Yana is also a staff member of the Kiriath-Jearim and Masada Expeditions. 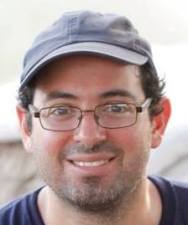 Naama is now a PhD candidate, under the supervision of Prof. Israel Finkelstein at Tel Aviv University. Her current research focuses on the transition from the Intermediate Bronze Age to the Middle Bronze age at Tel Megiddo. She holds an M.A. from Tel Aviv University, produced under the supervision of Prof. Israel Finkelstein. Her M.A. thesis focused on the Intermediate Bronze Age in the Judean Shephelah.
Naama has worked on numerous sites across Israel and is a staff member of the Masada, Kiriath-Jearim and Meggido Expeditions. In addition to her field work at Megiddo, she also manages the Expedition’s on-line presence.

Technology in the Field 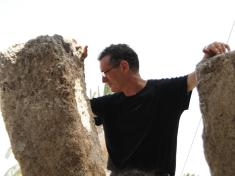 Peter Ostrin provides IT and data recording support for the Megiddo Expedition. Peter works full time in high tech but is passionate about archaeology and looks forward to each dig season. He has studied Archaeology and Cultural Heritage at the University of Leicester and holds a Masters in Computer Science from Rice University. Peter is interested in how current technology can assist in excavation and interpretation and works alongside the archaeologists to help record and manage the enormous amounts of data generated during and after a season.