Over 100 staff and team members worked at Megiddo in the 2010 season, which ran for seven weeks during June and July. Activities were carried out in four areas, all of which had been explored in previous seasons.

A three-day international workshop on dating methods in archaeology, titled “Synchronizing Clocks at Armageddon,” was conducted in June. It included discussions in the field and lectures on four physics-related dating methods: 14C, palaeo-magnetism, rehydroxilation and OSL (optically stimulated luminescence) (http://www-nuclear.tau.ac.il/megiddo-2010/contacts.html).

Work was carried out in three locations:

1) Final soundings were conducted in the Great Temple of the Early Bronze IB (Level J-4), in order to verify details of construction. Excavation below the floor of the temple indicated that the edifice was not built on a thick fill, as previously theorized.

2) The excavation in Upper Area J reached the northwestern corner of Temple 5269 of Stratum XV. This part of the building had not been exposed by the Oriental Institute team in the 1930s. The results seem to indicate that this temple was never completed.

3) A new sector was opened behind (to the southwest of) Temple 5192, in an attempt to reveal the nature of this part of the mound in the Early Bronze Age. This sector supplied additional evidence for the Early Bronze III (Levels J-5 and J-6). Excavation reached bedrock; no remains of the Early Bronze were found.

Excavation in Area J, which started in 1992, has now been concluded.

Work here focused on two Iron Age I layers – H-10 and H-11. It seems that excavation has not yet reached the destruction layer of the end of the Late Bronze, known from the Oriental Institute’s work in the palace area (the nearby Area AA).

Excavation here concentrated on the remains of Levels Q-5 and Q-4 of the Iron IIA. Part of a building with two still-standing, two-meter-high pillars belonging to Level Q-5 was uncovered. This structure has several features that resemble the cult room excavated by Schumacher in nearby Building 338 and the cult structure unearthed by the Oriental Institute team in the Iron IIA Building 2081 in Area AA. Excavation also focused on an accumulation of burnt debris from Level Q-4.

Two short, one-week micro-archaeology studies were carried out in Area Q in October 2010 and 2011 under the auspices of the European Research Council-funded project, titled “Reconstructing Ancient Israel: the Exact and Life Science Perspective,” directed by Israel Finkelstein (Tel Aviv University) and Steve Weiner (Weizmann Institute of Science). Work focused on geo-archaeology questions, with the help of an on-site laboratory. 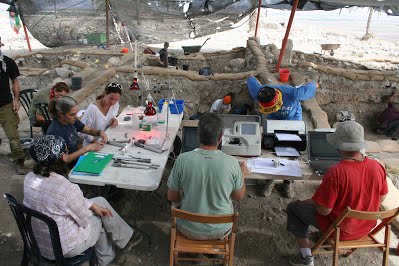